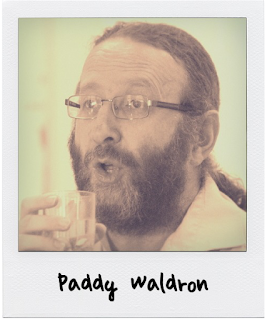 Presentation: Eugene the Blackguard & the Lynches of Moveen West

Night Job - genealogy. For more details of all my activities, see my website: http://pwaldron.info/

I am a third generation genealogist. My grandfather began work on the family tree before he retired at 65 in 1949. His mother had four children before she turned 21, including my grandfather and his identical twin, and she lived to 88, so was still around to help him. The identical twins posed a further problem for those who like to calculate expected percentages of DNA shared - by marrying two sisters, whose own father had married twice, to two first cousins. My father caught the genealogy bug from his father and passed it on to me at a young age. At the age of 13, I rewrote the whole tree. I've now spent 30 years trying to get it all into a computer database. Every time I think I'm nearly finished, another batch of new records comes online.

My degrees in mathematical sciences, economics and finance included a lot of statistics, which inspired my curiosity about drawing genealogical inferences from genetic data. The jargon finally began to make sense when I first heard Maurice Gleeson speak at the Irish Genealogical Research Society in March 2013. A few months later, Katherine Borges swabbed me at Genetic Genealogy Ireland 2013 and I have been hooked since my results arrived a month or so after that. My closest match at the time was a lady who was adopted in 1938. My best efforts to help her over the next three years turned up nobody closer to her than second cousins, but search angel Julia Bell has since found her original birth certificate and located some of her paternal first cousins and maternal half-siblings. Other adoption and fostering cases, including the one that inspired the title for my talk at GGI2016, have proved much easier to solve. I've also taken my own County Limerick ancestry back another two generations as the result of a DNA match between my first cousin and our fourth cousin twice removed, whom I already knew without ever suspecting a relationship or discussing our common roots.

I am now co-administrator with Terry Fitzgerald of the Clare Roots project at
https://www.familytreedna.com/groups/clare-roots-society/about
which was established to coincide with Maurice Gleeson's talk at the monthly Clare Roots Society meeting on 19 November 2015. By 29 Sep 2017, it had 816 members. Anyone with an ancestor who lived in County Clare is welcome to join. I am also co-administrator of the Clancy, Durkin/Durkan/Durcan and O'Dea/O'Day/Dee surname projects and am working on establishing an Irish Waldron Surname Project.

I have recruited well over 100 people to genetic genealogy in Clare, Limerick, Mayo and other ancestral heartlands via the DNA Outreach IRL project. In 2013, the top 30 matches for any Irish person getting autosomal DNA results were typically complete strangers; nowadays, I expect to know personally about six of the top 30 matches of anyone from West Clare that I swab. Working out the relationships can still be a challenge.

All that the Sacramento Lynches knew of their grandfather until DNA-matching connected them with Paddy Waldron in mid-2016 was that Eugene Lynch was a blackguard who abandoned his wife and children in Sacramento around 1910. The census of that year revealed merely that Eugene was Irish-born, and he could not be found in any other census. By November 2016, Eugene's grandchildren were meeting their long-lost cousins on a farm in the townland of Moveen West in County Clare, home to Eugene's grandparents and to their descendants for two centuries. The missing link between the Moveen grandparents and Eugene's mysterious appearance in California remained a puzzle until another Lynch visit to Moveen in 2019. A flash of divine inspiration during that trip, and the use of every trick in the genetic genealogist's toolbox, brought genealogical brick walls tumbling down. This talk will reveal how re-visiting the evidence produced unexpected breakthroughs, and not for the Californian Lynches alone.

GGI2017: Match Making in Clare using Y-DNA & atDNA ... Lisdoonvarna in County Clare is still famous for its annual matchmaking festival. Genealogists soon learn that in previous centuries marriage in Clare and elsewhere was always an economic rather than a romantic transaction. I will talk about some of the surprising trends in arranged marriages revealed by genetic genealogy.

To genetic genealogists today, the word "match" is more likely to suggest DNA comparisons than arranged marriages. As co-administrator of the Clare Roots project and an Ireland Reaching Out volunteer, I meet and greet members of the project when they visit Clare and introduce them, not to prospective spouses, but to long-lost cousins in Clare. Most of these meetings have provided new lessons about DNA matching which will feature in my talk.

The other type of match making that genetic genealogists engage in involves matching up (a) the oral traditions passed down through the generations, (b) the archival sources used by traditional genealogists and (c) the DNA evidence that often reconciles them, but sometimes refutes the oral tradition. My presentation will include many examples illustrating these points, using both Y-DNA and autosomal DNA.

GGI2016: The Ups & Downes of atDNA Matching ... My presentation will combine examples of the successful application of autosomal DNA matching from my own experience with my thoughts on the statistical shortcomings of the current matching methodology. Examples will include how to use phasing and triangulation to confirm or refute suspected relationships, often revealing unexpected double relationships. I will demonstrate other tips and tricks for managing lists of DNA matches. I will show how DNA matching inter-relates with adoption and inheritance searches, marriage dispensations, bad record-keeping, and other aspects of genealogical research. My examples will show how DNA matching unites the Irish diaspora around the world. Just like the financial markets, the work goes on around the clock, with Irish researchers often passing the baton at bedtime to those on the west coast of the USA, who pass it on to members of the diaspora in the Antipodes, who may have solved the problem by the time we wake up here in Ireland the next morning.

Posted by Maurice Gleeson at 12:56