Once again, our sponsor for this year's Genetic Genealogy Ireland conference is FamilyTreeDNA. Max & Bennett at FTDNA have sponsored our conference since its inception and have been keen supporters of citizen science since they first launched the company back in 2000. FTDNA are the only company that has created an infrastructure for the running of DNA Projects by ordinary "citizen scientists" like you and me. Without this crowd-sourcing initiative, citizen science would never have taken off in the way that it has over these past 15 years or so.

FamilyTreeDNA is based in Houston, where Hurricane Harvey devastated the city and surrounding areas. The clean-up after Harvey is going to take months and years. Luckily, FTDNA themselves were not too badly affected but several of their employees did suffer from the after-effects of the hurricane. Our hearts go out to them and we wish them continuing support. Max and Bennett started a fundraiser page for affected employees and are matching donations dollar for dollar. So far this has raised over $23,000. 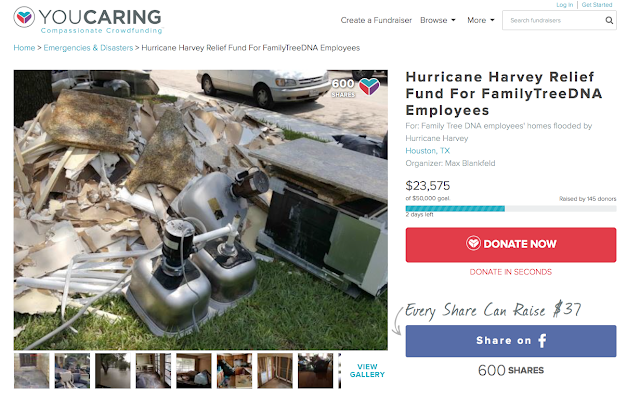 In addition, as members of the community and corporate citizens, FTDNA are donating a portion of the proceeds from the sale of all their tests (including upgrades and paid transfers) during the month of September toward Hurricane Harvey relief efforts. A banner on their home page will display the cumulative amount raised and will be updated twice daily. To date, they have raised over $11,000 toward hurricane relief.

If you are thinking about buying a DNA test in advance of the GGI conference, now would be a perfect time to do so. Not only will you be starting your own incredible adventure into the Land of DNA and Genetic Genealogy, but you will be helping other people in the process.


So for a whole host of different reasons, thank you Max and Bennett!

Posted by Maurice Gleeson at 11:40

Email ThisBlogThis!Share to TwitterShare to FacebookShare to Pinterest
Labels: GGI2017