We had a huge interest in the DNA Lectures at Back to Our Past this year from a variety of radio and TV stations. This was a major change from previous years and a very welcome one too. Radio and TV reaches a very different audience to that engaged in social media such as Facebook and Twitter.

Below is a selection of the TV and radio interviews that took place prior to GGI2016 and feature myself, Ann Marie Coghlan and Paddy Waldron. We also had some news coverage in the popular press, including this article in TheJournal.ie which has already been viewed over 24,000 times.

First of the radio interviews is a very comprehensive piece put together by the Morning Ireland programme on RTE (Ireland's national radio station). Will Goodbody, Science and Technology Correspondent, discusses the advent of genetic genealogy and specifically the DNA Lectures at Back to Our Past. Mike Mulligan from Ancestry also features in this clip (click the image to listen).


Pat Kenny is an institution in Ireland, being one of Ireland's premier radio & TV personalities. Pat interviewed me on his Newstalk programme and we covered a huge range of topics in the 15 minute spot including how DNA can help adoptees, the anonymity of sperm donors, identifying the remains of WWI soldiers, and the Irish genetic footprint in the Caribbean. Click the PLAY button below to listen.


Myles Dungan has run The History Show on RTE Radio 1 for many years and has a wide audience. Myles interviewed myself, Ann Marie Coghlan (DNA Corcaigh), and Paddy Waldron (Clare Roots Society) about genetic genealogy and the success stories we have had. Click the image to listen.

Lastly, I appeared briefly on the 6pm National News on RTE television discussing the 3 main types of DNA testing. It's good to see that Irish Genetic Genealogy is beginning to make national headlines in Ireland. 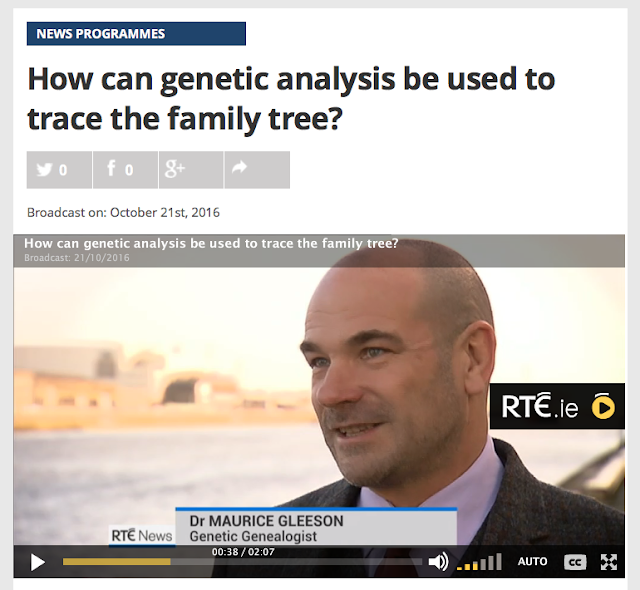 Posted by Maurice Gleeson at 02:40

Email ThisBlogThis!Share to TwitterShare to FacebookShare to Pinterest
Labels: GGI2016