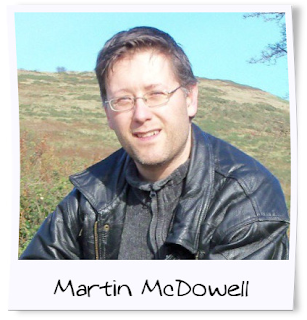 Background:
A lifelong interest in local history and family history was re-ignited after Martin got his first DNA test in 2012. As the education and development officer of the North of Ireland Family History Society, Martin is never more enthusiastic than when he is talking about the benefits of DNA testing. As one of the administrators of the North of Ireland DNA Project, Martin is keen to promote DNA testing across Ulster and has delivered a series of talks across the province to family history and local history societies as well as educational and religious groups. These talks aim to make DNA research understandable to the average person and to encourage more people to embrace the rewards of DNA testing.

How did you get into genealogy?
After learning about family trees at primary school I spoke to both my surviving grandparents (one on each side of the family) to get a list of all their brothers and sisters, nephews and nieces, parents etc. After getting a pretty good tree I then proceeded to ask them for a family tree for their deceased spouse as well. I wrote all of this out in a little jotter but in those days I didn't really know what else to do. I remember I did nag my father into taking me to the Public Records Office one day but all I got was gravestone inscriptions from the 1700s and that didn't really help so I promptly lost interest and went on to something else. In 2004 after my mother died I found the jotter again and started putting all the names I had into the internet and was astonished by what I could find. My addiction started that day. My first target was to build an online tree of 200 names and I thought that was going to be tough. Years later I have thousands of people on my tree and I'm still going!

Researching both traditionally and genetically has become both my day and my night job!

How did you discover Genetic Genealogy?
Getting my first DNA test was a very good experience. I really didn't see the point in getting an autosomal test and instead went for the Y-DNA and mt-DNA tests. It was ages before I bought a Family Finder test and yet that is the one that has helped me the most! It might be strange for others who know me to hear this but I was very skeptical about what it would give me at the start. Once I realised how much help a test could be and how much reading I had to do to understand it all, I realised that there was a need to raise awareness and help people understand their range of options - and then what to do when they got their results. This is why I started talking to our local branches and developed my Family Finder Training Course.

So what will you be talking about at GGI?

The Ballycarry project is examining a geographic area through DNA and attempting to find connections between people descended from families who lived there in days gone by. By testing people who would never otherwise test we have gathered unique evidence that can be used to build family trees backwards and sideways to recreate family trees long since forgotten.

GGI2019 Belfast: Why testing at Ancestry is not enough ... Due to the promotion of DNA testing by the North of Ireland Family History Society and ISOGG, many people within the nine counties of Ulster have now tested their DNA and more are testing all the time. This provides people throughout the world with a better chance of finding relatives of their North of Ireland ancestors. This talk gives tips and advice on how best to maximise your chances of using your DNA results to find relatives of those elusive Irish ancestors. Uploading your DNA to other sites, using chromosome browsers and joining projects will help you in ways that Ancestry DNA can't.

GGI2018 Dublin: Raising the Dead ... I will give a few practical examples of how autosomal DNA can be used to identify specific ancestors and explains how ancestor reconstruction can be used easily as a constructive tool to further your DNA research. This is something that isn't as complicated as it sounds and might just help you to break through that Brick Wall that refuses to come down.

GGI2018 Belfast: DNA and NIFHS - A Winning Combination ... Getting a family tree in Northern Ireland back beyond 1800 can be hard due to the destruction of many of the census records and parish registers that are traditionally used as sources in other parts of the world. That makes new methods of gaining information, such as DNA, particularly useful here. The North of Ireland Family History Society has embraced DNA research wholeheartedly. As well as organising beginners and specialised DNA courses, it now runs the "North of Ireland" project at Family Tree DNA and holds a monthly interest group. Come hear how the growth of the DNA Project means that it has become a particularly useful resource in itself. Now with over 1,000 members it can be used successfully by those with Irish ancestry to help identify common matches who also relate to those elusive pre-1800 ancestors.

These lectures are sponsored by FamilyTreeDNA and organised by volunteers from ISOGG (International Society of Genetic Genealogy).
Posted by Maurice Gleeson at 17:29