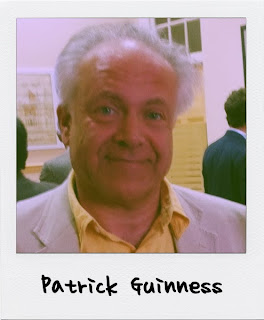 Patrick Guinness will be joining the panel discussion on The Genetic History of Ireland (Fri 18th Oct at 16.45). The following information about Patrick is taken from Wikipedia

Patrick Desmond Carl Alexander Guinness, KLJ (born 1 August 1956 in Dublin) is an Irish historian and author, and one of heirs of the Guinness business dynasty. Son of Desmond Guinness and Marie-Gabrielle von Urach, he was educated at Winchester College and Trinity College Dublin. He continues his father's business in real estate development and is a financial analyst. He formerly represented Sothebys in Ireland.

Historian
A historian, Patrick Guinness has authored a biography of Arthur Guinness, the founder of the Guinness brewery dynasty.[1][2] He has lectured on genetic genealogy relating to the early Irish dynasties and Viking Ireland, and has sponsored academic research on Irish genetics.[3][4] He is a council member of the County Kildare Archaeological Society[5] and of the Order of Clans of Ireland. He is a trustee of the Iveagh Trust and President of the Irish Georgian Society.[6]

Family
His daughter by his first marriage is the celebrity model Jasmine Guinness. He remarried in 1990 to Louise Arundel and they have 4 children. Through his mother's descent from the second Duke of Urach, he is a potential claimant to the medieval Kingdom of Jerusalem, Kingdom of Lithuania and to the Principality of Monaco (see Monaco Succession Crisis of 1918). He is also 2259th in line of succession to the British throne.

Honours
In September 2010, he became a Knight of Justice of the Military and Hospitaller Order of St. Lazarus of Jerusalem (KLJ) at a ceremony in St. Patrick's Cathedral in Dublin and in 2013 he was made a Knight Commander of the Order of the Eagle of Georgia by Prince David Bagrationi of Georgia.

This Wikipedia page was last modified on 12 August 2013 at 23:36.
Text is available under the Creative Commons Attribution-ShareAlike License; additional terms may apply. By using this site, you agree to the Terms of Use and Privacy Policy.
Wikipedia® is a registered trademark of the Wikimedia Foundation, Inc., a non-profit organization.

Posted by Maurice Gleeson at 23:09